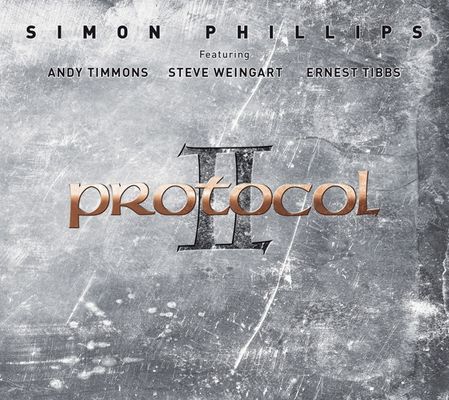 Simon Phillips is by far one of the world's most renowned and respected drummers, whose style not only reflects his technical gift but also his distinct musical sensibility. Whether it is Rock, Fusion or Jazz, Simon Phillips applies the same precision and intensity to his drumming, which is never lacking in emotion and feel. Best known he is for his stint with Toto from 1992 to 2013.

It has been 14 years since the release of his last project, Vantage Point, and finally it seemed to him to be the right time to record something new, very live and organic. Simon Phillips joined forces with Andy Timmons, Steve Weingart and Ernest Tibbs. After recording the first song and he knew immediately this was a great band – great chemistry – a deep pocket and a relentless supply of musicality. As they were recording this felt to Simon Phillips as though the Protocol concept was coming full circle and it was also 25 years since he released his first solo effort so it seemed perfect to be titled Protocol II.

For Simon Phillips this project was a joy to work on and he wants to thank Andy, Steve and Ernest for their wonderful energy, groove and improvisation captured on this recording.