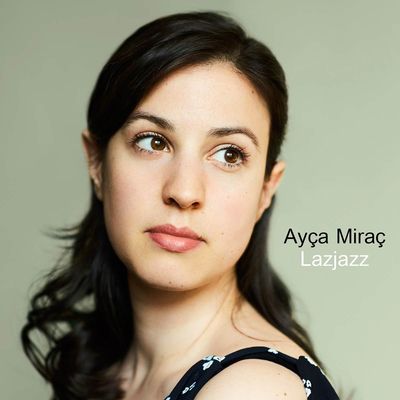 The Black Sea has always been a melting pot of cultures, a fascinating network of tones that is unknown to us. Along with her quintet, the young Jazz singer Ayça Miraç leads us into this world and connects it to the here and now: on her touching debut "Lazjazz" she spans a unique sound bridge between the centuries - from the cultures of the Laz and Mingrelian to the Bosphorus and onward to Bill Evans.

It rarely happens that after just a few bars, such a strong charm for the ears is created: "E Asiye" is the opening song of the debut CD by Ayça Miraç, which gives us a strangely mysterious melody. It touches upon deep layers of music history, warms the soul like a familiar feeling that has long been lost to us and now returns unexpectedly. This melody comes from the cultural treasure of the Lazi. Maintaining it is a primary concern for the singer.

Ayça, who grew up in Gelsenkirchen, Germany, draws from a wealth of cultural sources. Even her grandfather was enthusiastic about classical Turkish music and during her regular visits to Istanbul, the granddaughter heard these sounds. Here she has her second home. Ayça's father is the well-known poet and writer Yasar Miraç. Through his modal piano improvisations on Turkish melodies, he had an early influence on his daughter's musical imagination. Many of his poems are set to music, including by the incredibly popular folk group Yeni Türkü.

The second major source of sound for Ayça is the Lazi people - an indigenous group inhabiting the Black Sea coastal regions of Turkey and Georgia. Ayça’s Lazi mother is a founding member of Lazebura e.V., the association dedicated to the preservation of UNESCO's threatened language. Ayça attends Lazi festivals and concerts, explores the variety of music of these people. They have been subjected to permanent repression as a minority throughout their history. She strives to learn the sonorous idiom of the Black Sea "natives". And she enjoys this sonorous language during her stays in the region, which is wonderfully suited to musical embedding thanks to her use of onomatopoeia.

For Ayça, one thing was sure, after her schooling she was determined to turn her great passion for singing into her life. Jazz studies at the Dutch ArtEZ Conservatorium are on a high pedestal, including bossa nova and classical songs, such as those by Schubert or Debussy. Highly motivated, Ayça Miraç also colored her repertoire with Lazi and Turkish colors.

After many steps her courageous vision became clear: to combine the vocabulary of jazz with the treasure of the Black Sea coast into a modern sound language. She names this vision with a catchy and conclusive attribute: "Lazjazz". She gets help personally from Wayne Shorter: "Explore the barriers of your mind and do not be afraid of your own potential," he tells her in an intensive encounter.

Essential for the realization is bassist Philipp Grußendorf, whom she met during her Dutch years. Together, the two try out this new realm and begin creating the first arrangements. Grußendorf brings an acquaintance, the Brazilian pianist Henrique Gomide, to the emerging band, and in Markus Rieck, Ayça Miraç finds a sensitive drummer who approaches the sound of her voice respectfully. Finally, violinist Daphne Oltheten, gives the texture a rich overtone of colors. Nine fascinating songs are the result of this successful venture: the unique tonal language of Middle Eastern roots, US jazz and a touch of Latin flair combine the five musicians into an electrifying dramaturgy, with the clear voice of Ayça Miraç at the center.

The opening song "E Asiye" shows how the singer understands how to symbiotically insert an old, Laz melody into a jazz context. Subtly, she captures the traditional two-part harmony in the quarter-parallel between voice and violin - this old polyphony is still alive today with those Lazi that live on the Georgian border. Also in a Lazi dialect is "Avlaskani Cuneli" from the repertoire of the young deceased singer Kazım Koyuncu. In an advancing five-stroke folkloristic danceable song that flows into a piano improvisation is Gomides.

Both Lazi songs are a showcase for the gentle yet sovereign sensitivity of Ayça's voice. An excursion to the Mingrelian, the northern neighbor of the Lazi, makes one cheerful in "Va Giorko Ma": vocals, bass and violin combined with pointed piano notes, create a hymnic, almost archaic solemnity. But the language, closely related to the Lazi, also is brought into modern context when parallels to pop ballads jump out in “Veengara".

Twice Ayça Miraç dives into the Turkish cultural space: "Trabzon Sarkısı", her lyrical and light footed dedication to the fabulous Black Sea metropolis is her own composition, with which she dresses up a poem of her fathers’ in Impressionistic moods. The violin leans in its parallel passages here to the circle dance of Horon, which is traditionally accompanied in the Black Sea region by the Kemençe. With the urban ballad "Üsküdar'a Giderken", many a singer would have found themselves on a slippery slope: The worn declaration of love for the Istanbul district exists in countless variations throughout the territory of the former Ottoman Empire. With their version, the quintet bypasses the cliffs of clichés, by contrasting the evergreen cleverly with fragments of a Sephardic song and a more lively tempo. The second piece from Ayça Miraç's pen is "Dream Of Ilham", a dreamy, meek homage to her cat Ilham. His Arabic name ("Inspiration") seems to be anything but coincidence.

Finally, the journey goes across to America: With "Turn Out The Stars" Ayça picks up an intense piece from her favorite pianist Bill Evans, slowing it down to an intense ballad, which also shows her as a stylistically confident and soulful standard interpreter. The CD ends on Brazilian soil: The moving "Menina Da Lua" by Renato Motha, is a comforting song. Philipp Grußendorf brought the gentle closing track along from his Brazilian explorations in South America. The title of “Moongirl” also refers to Ayça herself. Her name also means “bright like the Moon”.

Ayça Miraç's "Lazjazz" adds an exciting chapter to the creative dialogue between European jazz and the treasure of traditional sounds of the East. And her voice shines as a bright star that is just rising in the vocal heaven.