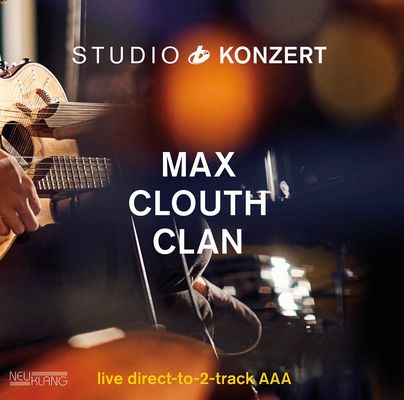 Max Clouth Clan‘s musical journey evokes places and memories in the minds of their listeners. The Clan describes itself as a band, but Max Clouth’s varied guitar-playing clearly shapes the quartet’s sound. By the way: in addition to the traditional semi-acoustic guitar, Clouth plays an acoustic or electric “Lotus-guitar” custom made for him. The Lotus-guitar has two necks, one with and one without frets, and additional sympathetic strings. With his custom-made instrument, Clouth gets close to the aestheticism of an Indian Sarod or Arabic Oud.

Drummer Martin Standke is one of the Clan’s founding members. They were joined by Markus Wach about three years ago and by pianist and keyboarder Andrey Shabashev from Russia in 2016. The team was completed by Michael Makarov (violin) and Leana Alkema (Cello). Clouth’s idea of Jazz is mostly reminiscent of the “rough, unpretentious Jazzrock from the Seventies”. He names John McLaughlin and his Mahavishnu Orchestra as one of his main sources of inspiration, as well as Embryo, Jimi Hendrix or the more experimental early Pink Floyd. “Even at the age of fifteen, conceptual music with a kind of story that connects the whole album was fascinating to me.” Of course, he also enjoys the nimble-fingered skill required for speed, as long as it’s not misused as an end to itself.

A new look for our STUDIO KONZERT series

STUDIO KONZERT has given us five years of unique listening experience – now there is a shiny new look to go with it. The new design is more lively, it’s fresh, it’s contemporary.

Of course this does not change any of the elements that are characteristic about STUDIO KONZERT: The purely analogous process, from the instrument to the recording device, the well-loved miking-design, the manually numbered limited edition, the studio hall with the attentive audience, and the 180g Vinyl. The sleeve was designed with meticulous attention to detail. From now on, the haptically-pleasing inside-out design perfectly complements the musical pleasure within.

STUDIO KONZERT is the audiophile Direct-To-2-Track fully analogue recorded concert series, produced by the Bauer Studios since early 2013 and available in shops as numbered and limited 180g vinyl records with a premium-quality packaging.

STUDIO KONZERT: That is our large atmospheric recording room, which inspired numerous first-class artists. That is also extreme concentration and highly motivated artists for this very special moment. It is an attentive audience captivated by the fascination of this moment. This is the only way to create such fascinating moments in a very special concert situation.

STUDIO KONZERT: That are experienced sound engineers who conduct the acoustic brilliance with our first-class studio equipment: precious microphones, analogue effect devices and our clear, analogue Neve mixing console. Our Studer A 820 tape-records in a unique “direct-to-2-track” way.