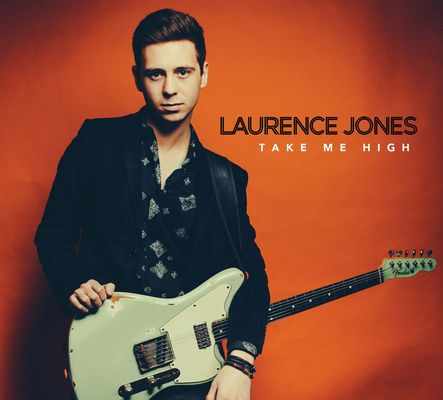 Britain’s hottest gunslinger. Blues-rock’s most legendary producer. If the hook-up between Laurence Jones and Mike Vernon sounds mouthwatering on paper, just wait until you hear Take Me High. Released in July 2016 on Ruf Records, this fourth album represents a spiritual passing of the baton, with the producer who recorded everyone from Eric Clapton to Peter Green in the ’60s now working with the cream of the new blues generation. It was a great feeling, says Laurence, to know Mike wanted to make this record.

The pair had discussed a collaboration as far back as 2013, but their conflicting schedules had always scuppered the plan. Mike remains much in demand as a producer, and likewise, since last year’s acclaimed What’s It Gonna Be – #18 in The Blues Mag’s 50 Essential Albums Of 2015 – Laurence has barely stopped, playing everywhere from the Royal Albert Hall to Carnegie Hall.

By January 2016, they were ready to hit Headline Music Studios in Cambridge, with Laurence leading the core band of Roger Inniss (bass), Bob Fridzema (keys/organ) and new drummer Phil Wilson as they tracked live. Within a head-spinning ten days, the basic tracking was complete – but Laurence wasn’t prepared for just how good the songs would sound after Mike had finished mixing them at his home in Spain. He sent me the stuff over, and it was like, ‘Wow’. He’d just fattened everything up. It was just a completely different sound because of him. I’m so happy with this album.

Released in July on Ruf Records, Take Me High is another step up for an artist who embodies the best of the modern blues boom. Featuring ten new songs that demand to be heard live, the release will also be supported in 2016 by a heavy international touring schedule that underlines Laurence’s growing popularity across the planet. We’ve got a UK tour in November, he reveals. And we’re gonna be working in Poland, Spain, Italy, Belgium, Holland, Germany, the Caribbean, Norway, Denmark – and even America. So anyone who says the blues is dead… it’s really not!