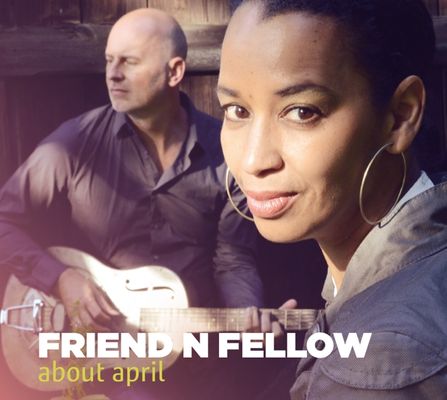 April – the month that doesn’t promise anything but instead challenges our patience or causes us to smile, that can surprise us over and over again and make us happy – that is the starting point for FRIEND ‘N FELLOW’s 10th album with 12 new songs. Music that is enchanting, inviting and moving... Stories about a jumping dog, the lemon yellow sun, the signpost, the guardian angel’s tree and of course about April...

Friend `n Fellow‘s trademark has been to concentrate on the quintessence for far more than 1,000 concerts, 9 albums and 100,000 records sold. The duo celebrates its intense musical dialogue with the low voice that deeply touches us and the guitar sound that takes us far away.

Constanze Friend and Thomas Fellow have long since discovered their own unique language that surprises and thrills the audience, focusing on the core of the songs, the essence of the music. That is why the uncountable forms and colors of April are just the right theme for their new album.

The music of Friend `n Fellow effortlessly unifies what seems to be opposites. Blues? Jazz? Soul? Music that is often pegged to be separate ends up together with Friend `n Fellow. They play with the timbres of soul, the intensity of blues and the freedom of jazz. And there is always ample room for listening.

A voice – unmistakable and low. A complete band consisting of two hands and just one instrument. And a dozen vivid songs about April. That is all you need. Or, as a magazine so fittingly described it: A voice, a guitar – the rest is amazement.