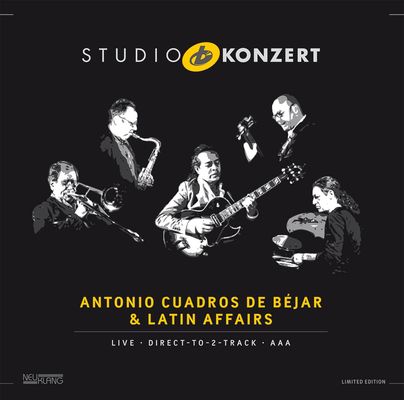 STUDIO KONZERT is the audiophile Direct-To-2-Track fully analogue recorded concert series, produced by the Bauer Studios since early 2013 and available in shops as numbered and limited 180g vinyl records with a premium-quality packaging.

STUDIO KONZERT: That is our large atmospheric recording room, which inspired numerous first-class artists. That is also extreme concentration and highly motivated artists for this very special moment. It is an attentive audience captivated by the fascination of this moment. This is the only way to create such fascinating moments in a very special concert situation.

STUDIO KONZERT: That are experienced sound engineers who conduct the acoustic brilliance with our first-class studio equipment: precious microphones, analogue effect devices and our clear, analogue Neve mixing console. Our Studer A 820 tape-records in a unique “direct-to-2-track” way.

The 35th STUDIO KONZERT on Vinyl

Antonio Cuadros De Béjar is one of the most consistent jazz and Latin musicians of the Stuttgart scene. The Bolivian-born guitarist began his musical journey in 1990, which led him across the American continent and on to Europe, carrying with him a most precious and valuable cargo: his antique musical heritage. This musical, artistic journey has enriched him with many different styles and traditions; his guitar playing is influenced by George Benson and Pat Martino, and rounded off with an enchanting South American flair.

With Latin Affairs he has joined forces with other first-class musicians to accompany him passionately on this leg of his musical journey.