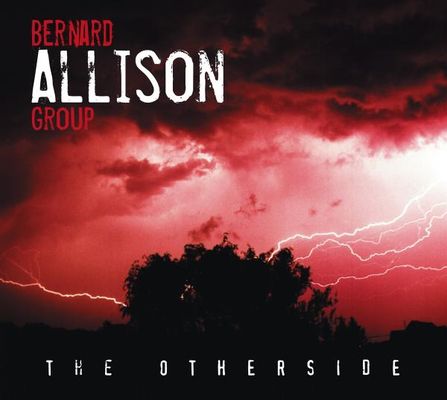 Bernard Allison stepped out of the shadow of his father since

his own unique sound, a rocking - funky interpretation of the blues. In 1990, he

presented with his furious album "The Next Generation" (Mondo Records), his

musical abilities for the first time a broad audience. After different extensive

tours in Europe more albums were released. 1999, two years after the death of

his father, Bernard Allison decided to go from Paris back to the United States.

With his explosive lead and slide guitar playing, his energetic voice and the

stunning songwriting, he managed to pursue his career in the home country. In

and the name was program! From soulful ballads to relax on rainy days to

piercing guitar crashing to the unravelling when one late night driving.

Two years later, the next stroke of genius follows: "The

Otherside" will be released on 12th December 2009 in Germany. The album

contains 13 songs, which demonstrate once again the bandwidth of Bernard

Allison: This album has it all!

The instrumental opener "Send it” in shows, where it goes on

this album: The Blue Funk by Bernard Allison from the "Chills &

Thrills" album has a touch more blues and less funk, like the

cover song "The way you treated me stressed ..." shows. The track "Tired of

trying", written in conjunction with the tour guitarist Michael Goldsmith, is

groovy and soulful like "As Simple as that." The title song "The Otherside” is

Master" remains faithful to this line. "Allison Way" is a dirty Blues song and

singing talent of keyboard player Bruce B. McCabe, " Leavin the Bayou" is going

back to the roots of the blues. "Life Goes On" is a wonderful cooperation

between Bernard Allison and Bruce B. McCabe and about Jimi Hendrix's "Fire" is

nothing more to say than: Jimi would love it! "Clear Vision" is another homage

to the blues. But a BA Cd would be no Bernard Allison album without a song of

his father, Luther Allison. With “Let's try it again” Bernard is doing a deep

bow before his father: "Although my father passed away, he has gone nowhere for

me. He looks down at me every minute. He knew what my heart was and what I

The new album "The Otherside" is a thoroughly enjoyable album

in itself, which should inspire not only the inveterate fans!